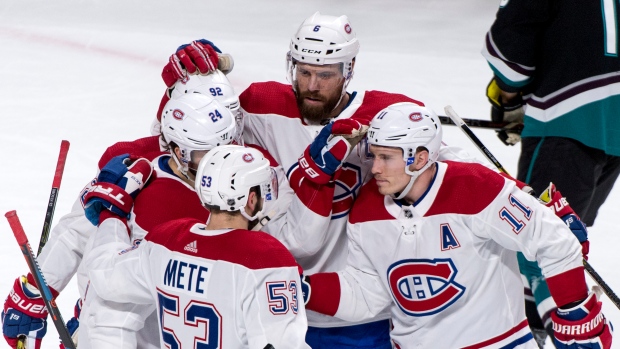 Jesperi Kotkaniemi and Phillip Danault also scored for the Canadiens (30-18-6), who improved to 7-1-1 in their last nine games. Jonathan Drouin had three assists.

Carey Price made 24 saves on 25 shots for his sixth straight victory – his longest personal win streak since the 2016-17 season.

Price is now six wins away from tying Jacques Plante for winning the goaltender in Canadiens history.

Captain Ryan Getzlaf scored the lone goal for the Ducks (21-24-9), which has lost five in a row. Goalie Chad Johnson stopped 28-of-32 shots in defeat.

Anaheim has conceded 19 goals in the last three games in a 9-3 loss in Winnipeg on Saturday and a 6-1 defeat in Toronto on Monday.

The Canadiens were all over the Ducks from the opening faceoff, scoring twice before the visitors even got their second shot on goal.

Gallagher got the first at 7:11 of the first period after sustained forecheck by Danault in Anaheim's zone led to a turnover by Josh Manson. The puck ended up on Gallagher's stick for his team-leading 20th of the season.

With Paul Byron injured (left forearm) and Tomas Tatar out sick (flu), Kotkaniemi saw his playing time shoot up. The rookie thanked his coach for the extra minutes with his third goal as a rebound at 9:36.

The Canadiens made it 3-0 at 16:39 of the first when Gallagher, with his second game, fired a one-timer from the slot past Johnson after a poorly timed line change by the Ducks.

Anaheim got one back through their captain Getzlaf, who beat Price on the wraparound at 11:27 of the second period. Getzlaf leads the Ducks with 47 points this season.

After taking their foot off the gas pedal in the second period, the Canadiens started the third with renewed vigor.

Danault restored the three-goal lead at 2:31 after a no-look pass by Drouin behind the net fooled Johnson into looking the wrong way. Danault has eight points in his last nine games.

Notes: Price improved to 3-6-1 all-time against the Ducks. … Montreal finished 0 for 3 on the power play.