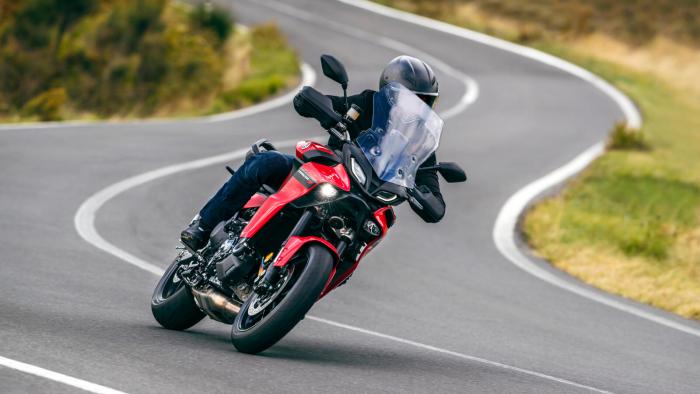 After the new naked models of the MT range (MT-09, MT-09 SP and MT-07), Yamaha now removes the veil from the new version of the most successful crossover-the Tracer 900 and renames it for the New Year. At TThe racer 9 comes with a new, more powerful 889cc engine, a new line, and more standard equipment.

Let’s start with a completely redesigned engine, as in its sister MT-09, taking into account the new Euro 5 pollution control regulations. Inside the crossplane three-cylinder, almost all major components are new, including pistons, connecting rods, camshaft and crankcase. So the displacement increased from 847 cc to 889 cc., The bore is the result obtained by increasing the stroke (59.1m to 62.1m) by 78mm without changing. Nevertheless, the 2021 power unit, including the new exhaust, is 700 grams lighter than the previous model. An additional 42cc The maximum power increases by 4 horsepower and reaches 119 horsepower at 10,000 rpm. Torque has also increased, now peaking at 93 Nm at 7,000 rpm and 1,400 rpm. First place was the rpm scale (previously 87.5 Nm at 8,400 rpm). One of the key features of the new 889cc engine is the all-new fuel delivery system. The Tracer 900 is equipped with an injector attached directly to the cylinder head, but in the new model, fuel is injected to the rear of the intake valve head. According to the manufacturer, this system allows for better atomization of the fuel and also reduces the adhesion of fuel to the intake port walls. It also contributes to 9% fuel savings. Despite the larger displacement, the new engine is 700gr. It is lighter than before.

The ride comfort by wire throttle and intake and exhaust systems is also new. The new inlet utilizes a new three-channel layout air filter, each duct having a different section and length. The new stainless steel exhaust duct has a different curvature.

The transmission has been optimized by slightly increasing the ratio of first and second gears, while the slipper clutch uses a new material for the friction plate and changes the cam angle to make the lever lighter. In addition, the new exhaust system is 1.4 kg lighter than before.