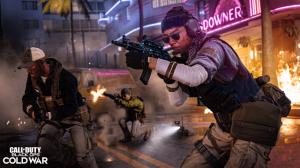 [테크월드=방제일 기자] ‘Call of Duty®: Black Ops Cold War’ was released worldwide on the 13th. It is expected to add momentum to the successful move of the highly popular Call of Duty series, including 100 million monthly active users (MAU) worldwide, including Call of Duty Mobile. Free content and community events are provided, as well as fun videos and social events for Korean fans.

The new Black Ops Cold War combines intriguing conspiracies in the middle of the Cold War with popular culture of the 1980s. In the campaign mode’s virtual story, players are forced to tackle decades of conspiracy that might change history and destabilize the balance of global hegemony.

You can also enjoy a next-generation online multiplayer mode where you can battle with weapons and equipment from the Cold War era across a variety of new battlefields and modes, and a completely new survival co-op experience, the Zombie Mode.

Call of Duty: Black Ops Cold War provides integrated progress across all modes and supports crossplay between current and next generation console systems. In addition, you can expect free content and in-game community events after the launch of Black Ops, the largest ever in the multiplayer battlefield and zombie mode.

Today is just the beginning, and all players can look forward to the largest Black Ops franchise ever, free post-launch content, community events and ongoing support, as well as tight integration across the gaming ecosystem with Warzone. “This is the best time to enjoy Call of Duty.”

In commemoration of the release of Black Ops Cold War, which is attracting attention by appearing in multiplayer with the release of Kwon Song, an operator from the Korean special forces, a variety of content will be presented outside the game for Korean fans.