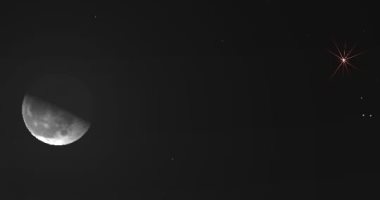 The moon appears before midnight the following Friday and arrives at 2:39 a.m. Cairo time (12:39 a.m. GMT) in the last quarter, cutting off three-quarters of Earth’s orbit over the course of the month.

The moon is observed from high on the sky dome with the onset of sunrise on Saturday against the blue background of the sky and remains visible until noon, depending on local time.

The Moon is known to orbit the Earth every 4 weeks, resulting in a combination, a new moon at the beginning of the month, the first quadrature, an increasing hunchback, a full moon, then a decreasing hump, the last square, the end of the month, and 29.5 days. Every time it goes back to combining again. It also means that the moon moves rapidly across the sky, from one night to the next, the moon cuts 13 degrees in the sky dome, which causes the appearance and disappearance of the moon to appear an hour later each day.

The last quadrature period, when half of the moon and the other half appear dark, is an ideal period for observing the topography of the lunar surface with binoculars or small telescopes. Because the mountains and craters are very clear. 3D is an ideal opportunity for monitoring and photography.

Over the next few days, the distance between the moon and the sun in the sky dome decreases until the moon reaches a crescent state at the end of the month, and is observed just before sunrise in preparation for fall with Rabi’al-Awwal 1442 month.