We want to advance democracy. 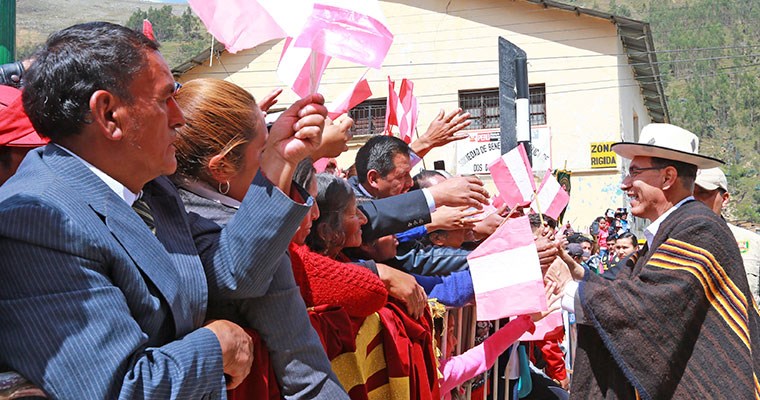 His commitment to the implementation of the Peruvian Social Convention through the war on corruption and the promotion of regional development reaffirmed the head of state, Martín Vizcarra. Martín Vizcarra also said that for the coup

On the 148th anniversary of the founding of the province of Dos de Mayo (Huánuco region) in the La Unión district, when the president took office, in his message on March 23 this year, the Republican National Assembly decided to sign a social agreement for two reasons: I agreed to the appointment.

A senior official said, "We fight against corruption and make progress," and seven months ago several discussions were held at the same time.

"Yes, we can do it at the same time." Demonstration, we are creating a development project for the country and at the same time fighting corruption, that is what the population is asking and that is what we will do for you. " He highlighted the process of signing a contract for improvement and preservation of the Huánuco-La Unión-Huallanca highway corridor.

The head of state said the government has decided to promote important constitutional changes in order to lay the foundations for political reform and national judicial system. For this reason, on December 9th, we will vote on the four proposed reforms by the executive branch.

"Proposals for transcendental changes in the constitution cause political noise, even create transcendence, called" false information "and are fueling instability in the population.

Last weekend, he said, "We have received a lot of false information and talked about the coup d'etat, how irresponsible we are: Peruvian citizens are guarding democracy and I am the first president to keep democratic, constitutional, Together. "

"Let no one ever talk about coup because we want to progress to democracy, democracy allows us to meet directly with you, allows war against corruption, To continue. "

President Martín Vizcarra says he is working every day to improve the living conditions of the Peruvians and to carry out important social and infrastructure works and with ministers of ministers he moves to different regions and makes reality. Projects. In this regard, the Prime Minister will invest in more than 124.1 million soles to begin construction of an important Huánuco-La Unión-Huallanca road shaft, linking Sierra with that country's Costa and Selva, extending over 150 km .

The road axis Huánuco-La Union-Huallanca will run in five sections, with flexible pavements, berms and lanes as well as 24 bridges.

It also has drainage facilities that are tailored to the region's features, including drainage, relief drains and corridors, and includes speed clashes and river defense facilities in certain areas.

This road will facilitate commercial exchanges between La Unión residents, beef, potatoes, barley and corn producers, along with the markets of Hu & nuco and Áncash.