The Capcom hacking confusion did not stop, more information leaked from Capcom in 4chan and overseas online forums. This time, it’s a precautionary measure to avoid controversial topics such as gender, race, ethnicity and other issues.

Currently, no official confirmation of the accuracy of this document has been posted on the Internet forums, so please use it as a reference.

One of the briefings revealed that Capcom’s growing international popularity has dramatically increased the importance of political accuracy (politics, social justice, neutral words or expressions), including related social events (in the United States). Take Black Lives Matter as an example.) We’ve created a reference criterion taking into account the ever-increasing number of different types of players and the growing number of things to watch out for when launching marketing promotions. ■ Women can also play a leading role to avoid men becoming particularly strong, but women are weak and limited to supporting role positioning.

■ LGBTQ is the same as any other role.

Here, Capcom uses “The Last of Us” and “Tomb Raider” as correct female examples, while negative examples are “The Legend of Zelda” Link and Princess Zelda, “Super Mario”. Princess Brigitte is rescued. 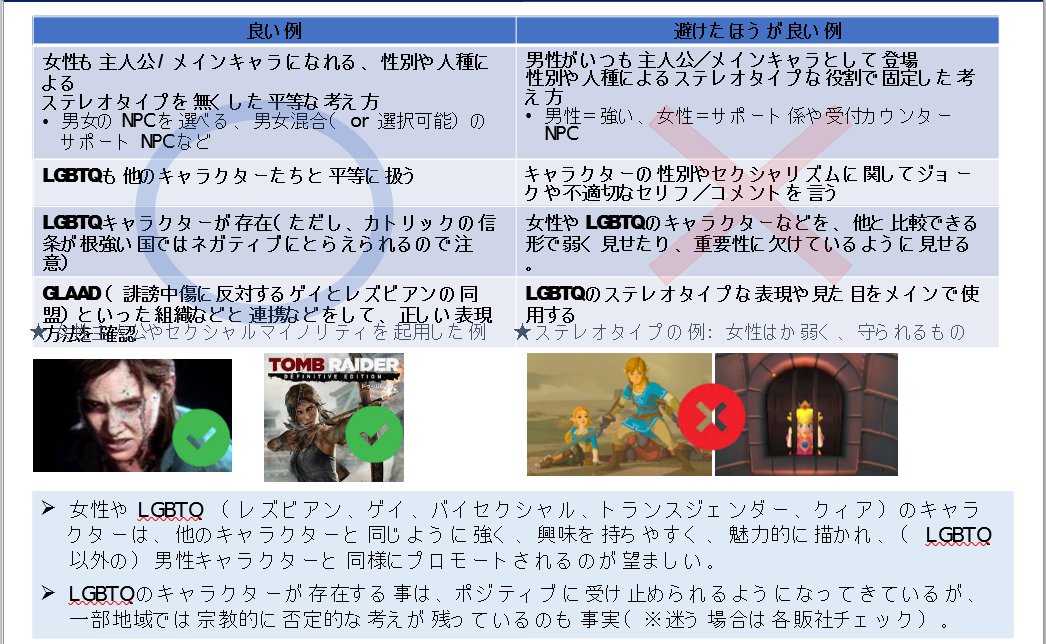 In this document, we constitute a reference to avoid controversial topics.

■ Don’t play specifically for a specific ethnicity, gender, and race, but use roles to provide diversity and choices (eg, ponytail hairstyles are not only for female actors, male actors can also choose). ■ All beings in the game world are equal and no particular race is strong or weak.

■ Equipment of different genders will have the same exposure (do not cover the male body, but females are especially naked, so similar places should be shown together). ■ Do not use certain negative words and phrases that allude to specific cultures or narrow cultural elements (eg, America is the Statue of Liberty).

■ Techniques for expressing cultural and international colors, including necessary preliminary research and interpretation according to modern knowledge.

■ Do not use too strong religious symbols. Even if it is usually used for Christmas, Easter, etc., it should be displayed in a more neutral way (e.g. Marriage Christmas turns into Happy Holidays). ■ All Nazi symbols and gestures, including certain abbreviations, are prohibited.

■ When using specific cultural or religious content, you should check with your local distributor based on your geography (eg if you need to localize pork to Arabic).

In the case of large multinational corporations like Capcom, care should be taken when dealing with related topics and using marketing materials, but following the hack, company documents that were only circulated in the past were directly spread to the public. .