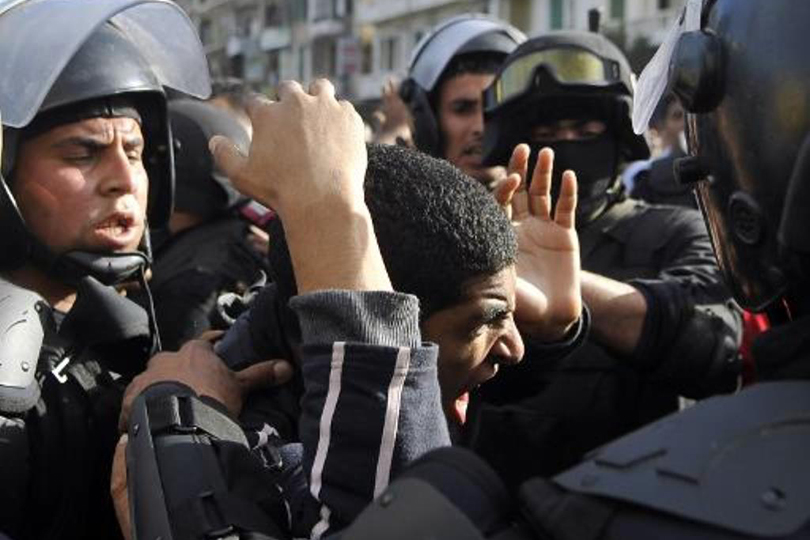 Since the onset of the novel coronavirus crisis (Covid-19), which has infected millions in many countries around the world, some Arab governments have exploited this epidemic to implement some laws and special procedures to further narrow the NASA to public and private freedoms and rights Tried. According to some reports, the Arab regime is now taking advantage of the coronavirus crisis under a new health slogan, repressing political opponents, imprisoning journalists, and the press and the press, as it did during a period of unstable security and the spread of armed terrorist groups in some countries. In particular, it enforced strict controls over the electronic media. Regarding restricting public freedom, most of them refused to release prisoners of conscience despite the health risks they face in overcrowded prisons, and some sources have refused to release them.

Some observers say that some governments are taking advantage of the fear and panic state of the coronavirus to use fears of the spread of the coronavirus to pass desired policies, strengthen security controls, and activate emergency laws that give security forces broad powers and prevent assembly. And imposing strict restrictions to emphasize stopping protests and public protests and others. As announced, another measure to protect the people is that these regimes are still implementing policies of oppression, hunger and corruption, which have had a profound impact on many critical sectors, including the health sector.

Prior to the outbreak of the epidemic, as quoted by some sources, King Abdullah II signed a “defense law” that applies only to emergencies, giving governments and security forces exceptional powers that arrested hundreds of people who did not follow the curfew order. . Human Rights Watch, a human rights group, urged Jordan not to undermine the basic rights of citizens. In Morocco, armored patrols appeared in Rabat to help citizens comply with a “health emergency”.

In Egypt, the government has previously targeted media outlets that have questioned the low official tolls of people infected with the novel coronavirus. The British newspaper “The Guardian” reported that an Egyptian correspondent had been forced to leave the country after seeing an article that the authorities considered to contain “bad faith”. Families of prisoners of conscience in Egypt sounded an alarm warning of a possible disaster due to the outbreak of the novel coronavirus in an overcrowded and miserable prison in Egypt.

Human Rights Watch revealed that Lebanese security forces used “excessive force”, including the use of live ammunition, on anti-government protesters after the Beirut port explosion. The explosion of high-explosive material that has been stored unsafe for years has killed at least 180 people and injured nearly 6,000 people, has damaged most of the city and has sparked the outrage of the political class that has already caused the economic collapse.

During the furious protests, some demonstrators raided government departments and threw stones at security forces. Reuters reporters heard gunfire. The Red Cross said more than 170 people were injured, including the police who had been stoned. US-based Human Rights Watch said, “The security forces fired athletic projectiles such as raw coal, metal pellets (pellets) and rubber bullets at people, including medical personnel, and fired excessive amounts of tear gas, including paramedics. First… the security forces also threw stones and beat them at the protesters.”

“This shows the illegal and excessive use of force against most peaceful protesters, who are ignoring the harsh authority of the people,” said Michael Page, the group’s deputy director for the Middle East, in a statement. The group has urged prosecutors to initiate an independent investigation and urge the Lebanese security forces to “investigate whether their support reaches the violating unit and stop immediately in this case”. The August protests are the biggest protests since October, with thousands of people going out on the streets to end corruption and poor management, blamed for the deep financial crisis that caused the collapse of currencies, freeze savings in banks and high unemployment. According to Reuters.

Meanwhile, 14 international and regional human rights groups, including “Amnesty International” and “Human Rights Watch,” are allied to defend freedom of expression in Lebanon following “crackling” and “attacking” authorities on those who expose corruption. Announced the formation. Aim.

“Lebanese politicians fail to secure the basic needs of their citizens, and their corrupt practices have wasted billions of dollars of public money,” the groups said in a press conference. The right to perceived power failure. “

Groups documented “a remarkable increase in assaults on freedom of expression and opinion” after protests against the 2015 national garbage crisis, and then “increased” with the onset of an unprecedented mass protest against the political class in October 2019. Said. About the actions the authorities took to prosecute criticism of the President as the case prosecutor assigned an investigation to the Central Criminal Investigation Department to verify the identities of those who posted posts and photos affecting the presidency. He requested that the prosecution be prosecuted for “disgrace, defamation and contempt.”

Aya Majzoub, a Lebanese researcher at Human Rights Watch, said at least 60 people have been summoned through “comments on social media” since October. And “this creates an atmosphere of threat in Lebanon where people feel they can’t express what comes to mind.”

Meanwhile, the Supreme Court of Bahrain, the Court of Destruction, sentenced two activists to death for murdering police officers after a trial based on confession excerpted through torture by human rights groups in 2014. Muhammad Ramadan and Hussein Musa missed the last chance to be sentenced to death for the first time in a criminal court in December 2014.

Security forces arrested hotel staff Musa and Ramadan, who was working as a security guard at Bahrain International Airport, after a policeman was bombed and killed in the village of Deir in the northeast of the capital Manama in early 2014. Ten other people were also sentenced to jail with them. Regarding the details of the case, Attorney General Haroon Al-Zayani said that the prisoners “determined to kill the police and prepared an explosive device for this purpose, which led to police officer Abdul Wahid Sayed. Muhammad died and several policemen were injured.” .

Amnesty International and the Institute for Human Rights and Democracy in Bahrain, a human rights group based in the UK, said the two were tortured to extract false confessions and faced sexual assault, beatings, sleep deprivation and other violations. Ramadan’s wife Jaina V. Ibrahim said on Twitter after the verdict, “I am in terror knowing that my husband can be executed by firing at any time without prior notice.”

Both human rights groups said they had prevented the two men from meeting with lawyers until their first sentence of death in a criminal court in December 2014. The Bahrain government said the case met all conditions for a fair trial, followed by the first case followed by a second trial investigating the accused’s allegations of abuse. Al-Zayani said in a statement that each defendant’s lawyer was present at every stage of the trial. He added that, according to the records of the medical report, the confession was made without any form of physical or verbal coercion. According to Reuters.

Bahrain has been cracking down on the opposition since 2011, when backed by Saudi Arabia to quell Shiite-led protests. With US naval headquarters in the Middle East, Bahrain has tried hundreds of people in mass trials and deprived them of citizenship. Most opposition figures and human rights activists have either been imprisoned or have fled abroad. In a statement, Ahmed Al-Wadaei, director of the Institute for Human Rights and Democracy in Bahrain, said in a statement, “Today’s ruling is another dishonor of Bahrain’s human rights struggle…

Meanwhile, in the context of the Yemeni War, Prince Mohamed bin Zayed of Abu Dhabi (Mohamed bin Zayed) is being investigated in France, led by a Parisian judge from the end of 2019 on charges of’implicated in torture acts’. According to several sources familiar with the file, a preliminary investigation into him began in October 2019 after he filed two cases in civil lawsuits during his official visit to Paris in November 2018. Complaints through civil proceedings initiate an investigation semi-automatically and allow the appointment of an investigative judge to handle the investigation.

It is noteworthy that while there are people involved in the territory of France, the French judiciary can pursue the most serious crimes on the principles of the “international judicial body”. However, the diplomatic immunity of the Emirati dictator is still in question and must be decided by an investigative judge. Mohammed Bin Zayed, who visited France on November 21, 2018, discussed the situation in the Middle East, especially Yemen, with French President Emmanuel Macron. It is noteworthy that the UAE has formed an alliance with Saudi Arabia against Ti after taking control of Yemen’s capital Sana since 2014.

Another case filed by three Kataris to the Paris prosecution for crimes against humanity and war crimes concerns “the involvement of torture and forced disappearance.” They confirmed that “between February 2013 and May 2015, he was arrested and tortured by UAE security personnel (…)”. However, this case was classified without follow-up, considering that the prosecution does not belong to the jurisdiction of the investigation.

In addition, a human rights group in Algeria said the court sentenced journalists and activists to three years in prison for impeding state integration. The National Committee for the release of detainees added that the court convened in Algiers also sentenced two activists to four months in prison on the same charges. The verdicts against journalist Khaled da Larni and activists Samir bin al-Arabi and Suleiman Hamitucce are related to the protests that defeated President Abdel Rajiz Buteplika last year.

The protests began in February 2019, rejecting Buteplica’s intention to save his fifth term and demanded the dismissal of the ruling elite. Authorities have banned protests this year to limit the spread of the coronavirus. Dararni was detained from the end of March, and Bin al-Arabi and Hamitoush were released in July after being detained for more than two months.

The human rights group also said that the Algerian judiciary has sentenced three activists to prison for allegedly undermining national unity, which criticized the president and the judiciary. The State Committee for the release of prisoners defending the three said that a court in the southern town of El-Bade sentenced El-Arabitaher and Mohamed Youssef Budiaf to 18 months in prison, and the Algiers court sentenced Suhive Davagi to one year in prison. Has been sentenced. The committee said the three were imprisoned primarily for social media posts criticizing the president and the justice system.

In addition, a young Algerian who supported the protest movement was imprisoned after a satirical picture criticizing the authorities in the eastern state of Setif was considered offensive to Islam. Wallid Kashida, 25, is being kicked out for posting satirical photos on social media. Investigative judges of the Court of Setif temporarily detained the young man for “insulting the courts”, “insulting the President of the Republic” and “insulting those known from religion. Kashida faces up to five years in prison and high fines.

Moamen Shadi, his attorney, added that he was given instructions because he thought it was “a lot of charges related to a simple post on Facebook” and that the investigative judge “wanted to justify the placement order” against his client. Attorneys regret arresting those who did not commit “serious crimes” before being sentenced, especially during the Covid-19 pandemic crisis, which poses an additional threat to prisoners.