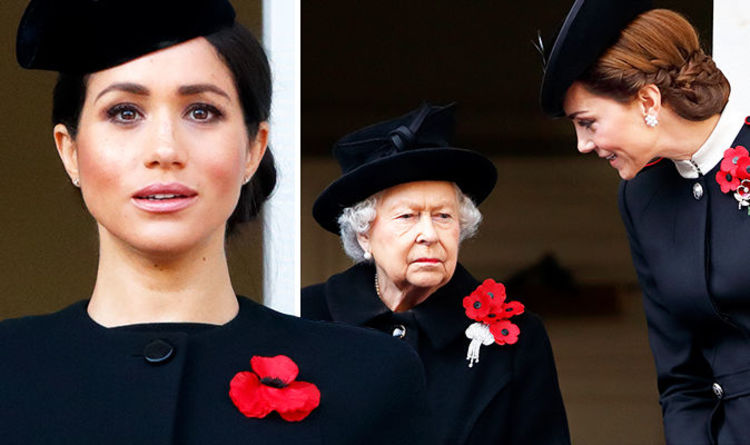 The Duchess of Sursex sparked controversy found on a separate balcony in Whitehall, away from other members of the royal family.

Meghan, along with Elke Büdenbender, wife of German President Frank-Walter Steinmeier, expressed respect for those who lost their lives during World War I.

Royal fans soon realized that Duchess was not stationed with other members of the Royal Family – Kate, Queen, and Camilla who were standing together on a separate balcony above Cenotaph in Whitehall.

But Richard Fitzwilliams, a royal expert, said the move was actually the moment when Megan got his fame.

He told Sun Online: "The balcony overlooking Whitehall, occupied by the royal family, is very small.

"The queen did not have a retired Prince Philip, Duchess of Cornwall and Duchess of Cambridge is the future queen guard.

"Like Meghan, Frau Elke Büdenbender had a distinctive sign because he was on the balcony with the German president's wife.

"This historic opportunity was the first time the German president or German delegate took part in the ceremony, and this was a very important moment of reconciliation."

Prince William, Prince Harry, and Prince Charles, who were wearing uniforms, took turns to make wreaths at Cenotaph to honor those who lost their lives during World War I.

Charles paid his first wrath in Senotap, paying homage to his mother. Duke of Edinburgh On behalf of the Communist Party of Philippe, vases have written wreaths.

Prince Philip Prince did not attend the Memorial Day Parade and appears to have been absent after officially retiring his royal duties last year.

The German president and his wife first wrote wreaths on the historic wreaths of reconciliation between England and Germany.

Among those attending the parade were Theresa May and Jeremy Corbyn, leaders of the Labor Party, dressed in bright red poppies in honor of those killed in battle.

The commemorative parade was held to commemorate the centennial of the treaty, which was signed by the Foreign Ministry for ending the war.

A total of 10,000 people gathered in Whitehall yesterday to participate in the Nation's Thank You procession past Cenotaph.

At the address of the Westminster Abbey service, Archbishop of Canterbury said: "We look back at the ruins and discover they have been rebuilt.

"We have a challenge in very different worlds and societies, but through faithfulness of God and obedience to love, we can see that conflict is changing, that the enemies are reconciled, and hope for the world."