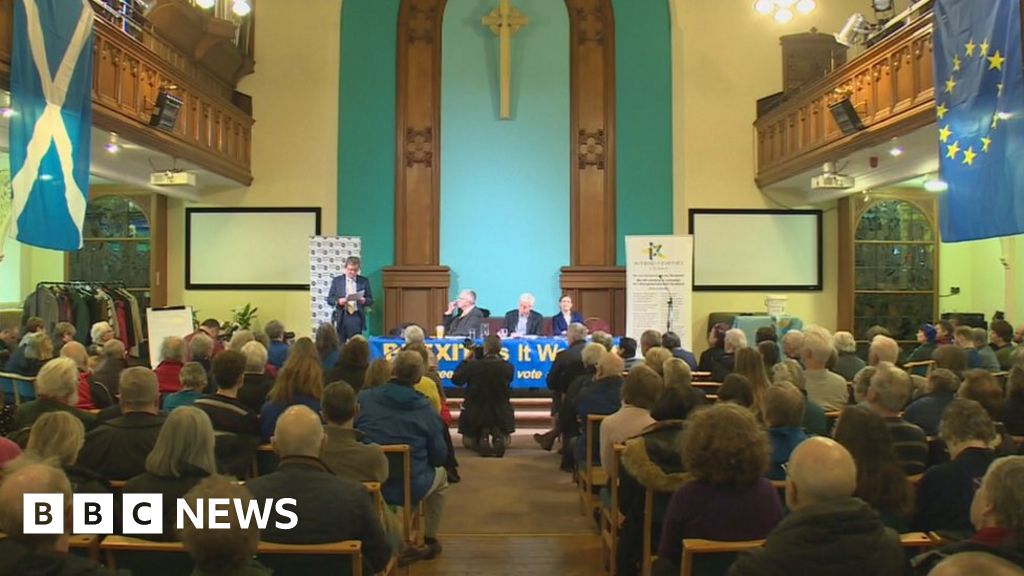 Campaigners for another EU referendum have gathered in Edinburgh to repeat calls to "stop the clock" on Brexit.

About 200 people met in the capital to hear cross-party speakers supporting the People's Vote campaign.

The UK government said it was committed to delivering the result of the 2016 referendum and leaving the EU on 29 March.

Mr Russell said Scotland was "more united than ever" in the EU and that Brexit should be halted.

At the rally, Mr Russell said the refusal to rule out a no-deal is "unconscionable" and warned it risks "economic ruin".

Mr Russell said: "It is really important that people take action because they look at the situation and feel powerless.

"They have a choice.

"People are campaigning for that length and breadth of these islands. And that's the right thing for now – let's get behind it."

Mr Russell said before the event: "In Scotland, at least, Brexit has not had the dividing effect that we've seen at Westminster.

"In fact, over the past two-and-a-half years Scotland has become more united than ever before in Europe and against the damage that Brexit will inflict."

He said the UK government needs to "face reality", adding: "Tinkering around the edges of their deal is a doomed strategy, no-deal brinkmanship is reckless and leaving that table with just over 60 days until we're due to leave the EU is unconscionable.

"We face the political challenge of our times, and we must not allow the Brexiteer to run down the clock and drag all the economic ruin."

The Rally for Europe event in Edinburgh on Saturday was one of several taking place across the UK.

He was also a member of the University of Glasgow at Sir Anton Muscatelli.

Sir Anton was speaking amid his own worries about the loss of a European research community.

He also spoke about the campaign for a further referendum as an economist, telling attendees. Brexit looked to be an "unmitigated disaster" for the UK economy.

Your guide to Brexit jargon

He said: "I think frankly its becoming pretty much the only option at the moment.

"Those of us who were advising the government on a softer approach to Brexit at the beginning now feel that there is no agreement within parliament.

"Really at this point, given the huge dangers of crashing out with no deal, or accepting a very bad deal, which economically, would be very damaging to the UK, the only option is really go back to the people.

"They are probably the only ones who can break the deadlock at this point."

Ahead of the event, Labor MP Ian Murray said: "It's clear that we need to extend the Article 50 process to avoid a no-deal Brexit.

"Labor Party policy, as endorsed by party conferences, should be supported, and it's time for the leadership to come off the fence and get behind behind this.

"All political parties should work together in the national interest, so that we can offer the people of the UK the opportunity to keep the best deal.

A UK Government spokesman said: "The government's firm policy remains that we are leaving the EU on March 29 and that we will not extend Article 50.

"What we need to do is to make the best of it."