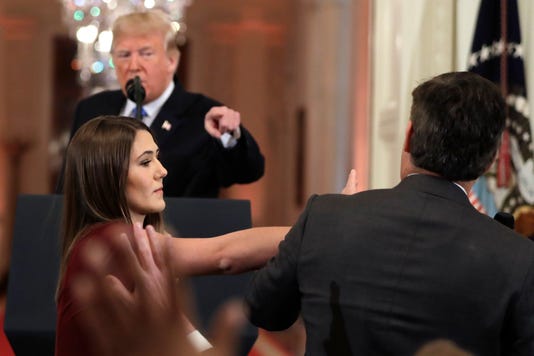 As President Donald Trump points to CNN's Jim Acosta, a White House aide takes a microphone from him during a news conference at the White House, Wednesday, Nov. 7, 2018, in Washington.(Photo: Evan Vucci, AP)

Trump refused to answer a follow-up question from CNN reporter Jim Acosta, who persisted in his attempt to ask the president about the interference in the 2016 presidential election. Trump spoke loudly over Acosta – with whom he has clashed repeatedly – and demanded he hand over the microphone to the White House staff.

When a White House aide tried to take the mic from him, Acosta yanked it back.

"On the Russia investigation, are you concerned that you may …?" "I am not concerned about anything," he said.

President Trump to Jim @Acosta: "You should let me run the country. You run CNN."

"That's enough. Put down the mic." CNN should be ashamed of itself as a terrible person. pic.twitter.com/GR9TIbKUok

Trump stepped away from the lectern for a moment before returning to the microphone.

"I tell you what: CNN should be ashamed of itself," said the president, shaking a finger at Acosta. "You are a rude, terrible person."

The president added that "the way you treat Sarah Huckabee is horrible," referring to his White House press secretary. "You should not treat people that way."

Trump has had several combative news conferences since he was declared he was running for president in 2015, and he has consistently attacked media outlets for any coverage he considers unflattering (which characterizes as unfair).

He has repeatedly called the news media the "enemy of the American people," a charge he also leveled against Acosta on Wednesday.

After his barrage against Acosta, NBC News reporter Peter Alexander, who tried to come to a "diligent reporter."

Trump turned his ire on Alexander.

Even as the news conference went on, Acosta thanked Alexander on Twitter.

Things between Acosta and Trump first became testy on Wednesday when the CNN correspondent tried to challenge Trump on his assertion that a Central American migrant caravan heading toward the U.S. constituted an "invasion."

"I consider it an invasion," Trump said.

"As you know, Mr. President, the caravan was not an invasion," Acosta replied.

"Thank you for telling me that. I appreciate it," Trump said sardonically.

When Acosta continued to tell Trump the caravan was not an invasion, the president told reporter: "I think you should let me run the country, you run CNN, and if you did it well, your ratings would be much better."

Later, American Urban Radio Networks correspondent April Ryan tried to ask Trump something while he was answering another reporter's question about voter suppression.

"Sit down, please! Sit down! I did not call you," Trump told Ryan. He then finished explaining that he considered CNN's "inaccurate" polling a form of voter suppression.

When Trump is called on another reporter, Ryan again tried to shout a question to the president. He repeated his demand that she sit down.

At another point, Trump accused "PBS Newshour" correspondent Yamiche Alcindor of asking a "racist question" when he asked him about his term "nationalist."

"When they go low, we keep doing our jobs," Acosta later told CNN host Jake Tapper when asked about being personally attacked by the president. "We just can not be intimidated."

Acosta said that Trump "does not like being called out for his falsehoods" and that he believed the president was on the edge of losing the House in the midterm election and said his opening remarks "sounded very much like a pity party."

"The president is not used to seeing himself lost, and he is lost," said Acosta.

Acosta also said Trump "time and again seemed to be attacking journalists of color," referring to his exchanges with Ryan and Alcindor.

"This President's ongoing attacks on the press are gone too far," CNN said in a statement Wednesday. "They are not only dangerous, they are disturbingly un-American."

Trump frequently attacks the media, and he often hones in on Acosta and his employer, CNN. Their clashes date back to the days before Trump even took office.

Nine days before his inauguration, Trump attacked CNN for going "out of their way" to report on the salacious allegations against him "Steele Dossier," which purported to outline Trump's connections to Russia.

At that news conference Jan. 11, the then-president-elect told Acosta, "You're organization's terrible," and "do not be rude."

"You are fake news."